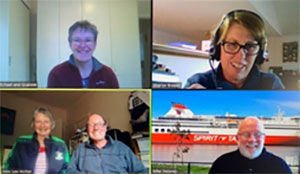 At the top end of the Archdiocese of Hobart sits Mersey Leven Parish. It comprises six rural Mass centres, with Sunday Mass attendance varying from 10 to 20 parishioners in Sheffield to 140-200 parishioners in Devonport. Tourism occasionally spikes these numbers. The parish sits within one of the poorest socioeconomic regions in Australia.

A few weeks ago. I caught up with four parishioners: Fr Mike Delaney, John and Glenys Lee-Archer and Grainne Hendrey. In mid-2018, I had met three of this group at a Divine Renovation Conference in Halifax, Canada, and we had travelled to the Rebuilt parish in Maryland, USA. They had been on a mission to discover new ways of being parish.

Fast forward to May 2020. I contacted Fr Mike to see if I could set up an interview with him and a few members of the parish to see how things were going.

My heart sunk a bit as the interview began. Their initial responses came as a litany of disappointments, and inside my head I was thinking, “This is not going to be a good news story”. However, they said they didn’t mind sharing their story, warts and all. In fact, the timing for them was opportune as they were currently going through a time of deep reflection on how things had gone over the last four years. And so, for the next hour or so, they shared their struggles and joys!

This story begins with Fr Mike. I give him kudos for realising many years ago that it was healthy and humble to look beyond himself for ways to improve the vitality of the parish. He had studied offerings from the Amazing Parish, Rebuilt and Divine Renovation ministries. He liked what Alpha had to offer. He became convinced that parishes must plan if they want to succeed in bringing more people to know Christ. Prayer is paramount. So together with the pastoral council they began the work of defining and refining what their parish focus should be. Prayer and sacraments, healthy organisation and discipleship (from the Amazing Parish platform) were distilled into, “Surrendering, Belonging and Growing”.

However, Fr Mike admits that there have been problems in trying to execute their comprehensive plans. These failings have led him to do some serious soul-searching over the last few months. He cites a number of issues that could have been handled better. Firstly, he didn’t appreciate the level of resistance there would be to ideas and resources that came from overseas, especially the US. So while he could envision how these initiatives from overseas ministries could filter through to Mersey Leven, he didn’t give enough credence to the local culture. Secondly, he didn’t realise how hard it would be to implement initiatives across the six Mass centres within the one parish. Trying to get everyone on the same page was difficult, and he felt he could have communicated better to the parishioners. Thirdly, trying to balance the ongoing maintenance of six Mass centres regularly took precedence over his ability of moving the parish into one that was more mission-focused. He knows, at times, that his frustrations about this has been felt by some parishioners. 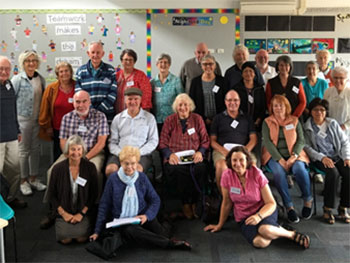 At this point I should introduce John Lee-Archer. Some years ago, Fr Mike looked to John as someone who might be able to articulate and translate his own deep thinking into something palatable for the local parishioners. For John, a retired school principal, the invitation couldn’t have come at a better time. He was on the pastoral council when Fr Mike asked him to read the Divine Renovation book. He liked the concept of a parish leadership team, who ensured the day-to-day work got done, and who would work closely with the pastoral team, the wisdom people and the action teams, parishioners responsible for particular ministries.

He could see how this way of being parish would encourage co-responsibility for the mission of the Church. No longer was the paradigm of “Father” being the only person responsible for what happened in the parish going to continue. For the most part, John felt very enthusiastic about being part of the leadership team. However, at times, he and his wife had niggling feelings that people saw John as “Father’s little helper”. John certainly didn’t feel comfortable about this. However, in hindsight, he wonders if his own eagerness to make things happen could have led to this perception. He completely accepts that responsibility lies with the leadership.

Glenys acknowledged that resourcing initiatives, and the parish as a whole, has been hard. So much time and money is spent on just maintaining six Mass centres, let alone the administrative work that has to get done. She also felt that this often got in the way of having the energy to build a mission centred parish.

Grainne has lived in the parish for 28 years. She raised her six children here and loves the community. However, she also feels that there has been a failure to bring all the Mass centres under the one umbrella. She noted that they had not been able to communicate the same message to all parishioners across the Mass centres.

I asked, given all the planning and hard work, “Was there any good news?”

They smiled. They quickly rattled off how 800 Christians had gathered for Holy Thursday last year as an initiative of the Devonport Christian leaders. John speaks of an online contemplative prayer group that has started since the COVID-19 lockdown. Glenys shared about a small group of people making daily phone calls to check that people are okay. There have been attempts to inject more periods of silence during the Mass, and the homily has been available as a podcast well before other parishes were embracing technological changes caused by the COVID-19 pandemic. There is provision of formation material every week for those receiving the online parish bulletin. Parishioners have also embraced Lenten and Advent programs. The list goes on.

Finally, John talks about their positive Plenary Council 2020 experience. He’s holding some small hope that this will bring much needed change. He said, “We need to know why we are doing this, and the centrality of Jesus to our lives. When that happens, things will change. But maybe we need a revolution, because what we have been doing just ain’t good enough.”