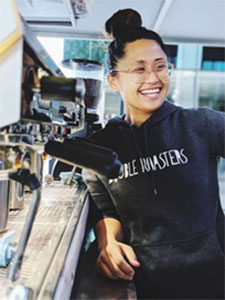 Qwayne Guevara is a dynamic, Catholic innovator whose personal faith journey convinced her that the key ingredients for getting people together would be the provision of a safe space to hang out, good food and some organised sports. And so, she started the Young Lions Café, and then an indoor sports centre called The Hustle. These ventures have proven to be innovative ways of evangelising to the broader local community.

In Qwayne Guevara’s first year of life, her family moved from the Philippines to Australia. Like many immigrants, her mum and dad came in search of a better life. They wanted to instil in Qwayne, and her younger brother, a sense of gratefulness for all that Australia had to offer. They also wanted to encourage a love for the Catholic faith, and so praying the Rosary daily and Sunday Mass attendance were constants in Qwayne’s young life.

When she was eight years old she made her first trip back to the Philippines with her parents. At this tender age, Qwayne could already feel her conscience being pricked by the poverty, hunger and other injustices on display in the streets of Manila. She names this experience as one that began to shape her understanding of humanity.

Qwayne cites a youth camp she attended when she was about 15 years old as the next significant movement in her faith journey. The camp, organised by Couples for Christ, gave her the space to explore her belief in Jesus, and what that might mean for her future. So her first big ‘yes’ to God was to become involved in youth ministry. And, her second ‘yes’ was to study law. She dreamed of working for the United Nations, and the law would be her key to solving the injustices in the world.

In her fourth year of university, Qwayne studied at the University of Miami. It was during this year that she experienced a time of desolation and despair; a time when less virtuous habits began to take hold and she questioned her faith. In this struggle she came upon two things that allowed her to hit the refresh button on her life. The first was to read the life of Augustine. She saw that he had also not led a perfect life, and his words, “O Lord, our heart is restless until it rests in you” struck a chord with her. The second was to watch the Catholicism series by the then-Fr Robert Barron. The Catholic world opened up to her, and she saw the universality and the beauty of her faith.

Qwayne returned to Australia ready to hone her legal skills and to immerse herself more fully in youth ministry. In 2016 she travelled to World Youth Day in Poland, and sensed that God was calling her into something deeper. Over the coming year or so, Qwayne prayed fervently that God would enlighten her as to what he wanted her to do. She travelled to convents and holy places around the world to discern what her true vocation might be. She was prepared to let go of her dream of marriage and children if God wanted her life to take another course. But God did not answer her. Well, at least not straight away, and not in the way she had expected. Frustrated and discouraged, and on the eve of her return to Australia, Qwayne began to hear that still small voice of God.

“Qwayne, I’m glad you want to do what I want you to do – but what do you want to do?” Qwayne’s response: “Are you serious, God?” It then dawned on her that in her love for God, and desire to do what he wanted, God had implanted dreams in her that she was free to act upon.

After this encounter, Qwayne knew she had to work in full-time ministry, which eventually led to her current role with the Parramatta Diocese. Qwayne started to focus on strategies which would encourage young people to develop genuine friendships with an emphasis on the centrality of community. Her life experiences led to establishing the Young Lions Café with her friend, another faithful young woman, and a sports centre called The Hustle, with a group of passionate young adults.

The Young Lions Café is a 10 minute walk from Blacktown station. It sits in the midst of office buildings whose tenants tend to be community service providers, and government agencies assisting the vulnerable. Nearby is the Blacktown Council offices and the Patrician Brothers College. To say the café’s clientele is diverse would be an understatement. Young Lions Café has been nominated as a finalist for the Local Business Awards three years in a row, and was voted best coffee shop in Blacktown in 2019.

As for The Hustle, it provides a venue for sporting groups to play and train. Qwayne also uses the venue with her teammates from the Embers basketball team. Team prayer before the game, playing fairly and being respectful of opponents and referees is their quiet way of witnessing to their Catholic faith. The Hustle also offers safe gathering spaces for church and friendship groups, as well as young families. It has become a community hub fostering a sense of belonging.

“Witnessing to the love of God is through our encounters.” Qwayne

There is a fairly unique evangelising strategy behind these initiatives. Qwayne says: “Witnessing to the love of God is through our encounters.” Everyone that is now involved in these ministries “recognises the dignity of each person that we encounter”, and those who come to the café or The Hustle “recognise that there is something more that moves us.” We know that “when we do little things with great love, people notice the good, and beauty, of this work and it leads them to the truth of God.”

Qwayne understands, with a wisdom beyond her years, that there is a strong human desire to be seen, to be known, to belong. She knows that when young people feel safe, secure and loved -- just as they are -- they will be more open to hearing about Jesus. She wants the young people she engages with to see their unique giftedness and to provide spaces in their lives to hear the Gospel. With joyful and boundless energy, Qwayne is living the dream God called her to.