The valuable role that women in the Catholic Church play may seem to many to be overshadowed by a focus on bishops and priests. Yet, at the Women as Church Conference hosted by the BBI-TAITE in October 2020, Mrs Louise Zavone and Dr Trudy Dantis sought to make attendees aware of the many and varied leadership positions that women now hold within the structures of the Australian Catholic Bishops Conference (ACBC).

The Bishops Conference is the permanent assembly of all the bishops of Australia and its aim is to provide an opportunity for the bishops to work together for common pastoral ends. Such Conferences exist in most countries around the world as a result of the Second Vatican Council’s promulgation of Christus Dominus (n 38), which recognised that bishops are often unable to discharge their office fittingly and fruitfully unless they work closely with other bishops.

The work of the Bishops Conference is broad-ranging and involves significant liaison between the dioceses, commissions, councils and other groups who play a part in the life of the Church in Australia. Such work can only be fruitful when there are sound structures, strong networks and a shared focus on Christ’s mission.

Because Bishops are often the face of public announcements of new initiatives or other activities happening within the Church, it can tend to make invisible the work done by countless people behind the scenes who “make things happen”. In many cases this work is performed by women. In fact, the statistics show that the percentage of women involved in both administrative and managerial roles is a microcosm of what is happening more broadly in the Church in Australia.

For many decades now, we have known that women make up the majority of those attending Mass and participating in parish ministries. Data from the 2016 National Church Life Survey shows that women hold 65 per cent of all leadership and ministry roles in parishes. These roles include lectors, special ministers of the Eucharist, leaders of prayer, youth or discussion groups, members of parish councils and so on. Overall, 42% of women who are part of parish life have a leadership role, compared with 38% of men. Recent data from Catholic dioceses reveal that significant percentages of women also have roles as chairs (56%) and members (45%) of pastoral councils and as members of safeguarding councils (49%).[1]

The contribution of women is not only limited to voluntary roles in parishes. Within the Church, there are over 3000 organisations that employ more than 220,000 people, and 77 per cent of these roles are occupied by women.[2] This is significant when compared with Australian society in general, where females make up only 46 per cent of the Australian workforce.

Across all the sectors, the presence of women is largely seen in education, health and aged care. But dioceses and parishes remain places where women contribute significantly. Around 78 per cent of all those employed in this part of the Church are women. Overall, within all Church organisations, women contribute not only through administrative roles but also as professionals, where 61 per cent of all professional roles are held by women.

The Bishop Delegate for Marriage and Family, Bishop Michael Kennedy, noted that over the past eight years that he has been a bishop, all of the Commissions that he has been involved in, bar one, have had a woman as the executive secretary. Each has been a professional with a specific skill set and expertise. As well as getting the job done, each has truly cooperated with the bishops in the work of their Commission in pursuing the mission of the Church. He said that he listens to their contributions and seeks and heeds their advice. He sees them as collaborators, as do the other bishops.

“I am glad that the bishops have recognised the authentic contribution these women bring to the Church. Quite frankly, without them, the ACBC and the Commissions would be a shadow of themselves”.

It may also surprise some to know that 47 per cent of the key advisors to the Bishops Conference are women.

Trudy and Louise introduced several women making a significant contribution to the work of the Bishops Conference.

Mrs Debra Vermeer is the Chair of the Australian Catholic Media Council.

Debra says, “I’m proud of the role women have taken in working with our bishops to bring the Gospel voice into the public domain. And I’m thankful for the opportunities I’ve been given to be a part of that”.

Mrs Trish Mowbray is the Disability Project Officer for the Conference and has been in this role for 12 years.

Trish acknowledges the women with whom she has worked saying that, together, they have made significant changes to attitudes and policies of the Church over the last 12 years. She says, that “together we forged the current rough path of inclusion for people with disability in the hope that we all might, in the future, continue to work together to smooth that road out.”

Miss Olivia Lee is the executive assistant for the facilitation team of the Plenary Council. As a 20-something young migrant Fijian-Chinese woman working at a national level for the Catholic Church in Australia through the Plenary Council, Olivia reflected that “equality” was the third word introduced into her vocabulary, after “mama” and “dad”. Her father was an amputee and her brother is blind in one eye.

Olivia reflects: “In seeking this equality for who I am and those whose blood I share, I have found acceptance and understanding in many spaces in the world, but only in the Church have I found these things together with love. It is this love and respect of my being, as well as a courage to trust in my youth and talents, that have shaped my growth into a disciple of God.”

Ms Jenny Brinkworth is the Chair of the Media Working Group Against Euthanasia, a member of the Australian Catholic Media Council and is also a member of the Plenary Council media committee. Jenny is also the director of communications for the Archdiocese of Adelaide, the editor of The Southern Cross and the former president of the Australasian Catholic Press Association.

“Through my roles on national groups convened by the ACBC, and my involvement in significant Church issues as director of communications for the Adelaide Archdiocese, I have been given the opportunity to use my skills and experience in media and communications to contribute to the life of the Catholic Church.

“I have always felt that my opinions and contributions are highly valued and have never considered gender to be an impediment to my voice being heard.”

Sometimes we think that women are “invisible” in the Church and their voices are not being heard. The contribution that women make to the Bishops Conference is a good news story and a sign of hope in our Church. 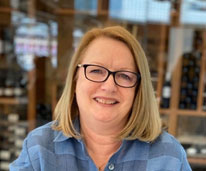 Click here to read the full presentation delivered by Louise and Trudy at the BBI-TAITE Conference, The Women of the Australian Catholic Bishops Conference.