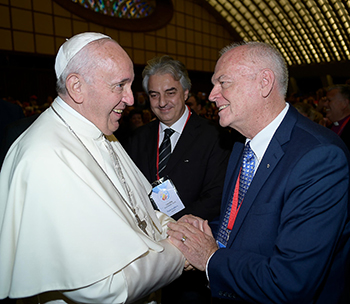 It is one of the strengths, and indeed the beauty, of Catholicism that we can embrace different expressions of our faith. Many people find that expression within the context of a parish community, while others find it within what we call ecclesial communities. The Catholic Charismatic Renewal (CCR) is one such community, finding itself part of the rich fabric of Catholic life within Australia and abroad.

The CCR, however, is not a single community, but rather a variety of entities which have formed for different purposes, such as evangelisation, prayer, service, worship, healing, catechesis and youth ministry. What unites these various groups is that at the heart of every group, and every member, is the desire to draw on the graces that flow from the Holy Spirit — described by the term, “Baptism in the Holy Spirit”.

The CCR, in its current form, has existed for over 50 years with large numbers of different communities across the world. In 2018, Pope Francis proposed that all CCR communities be served at the international level by one body. Thus, Catholic Charismatic Renewal International Service (CHARIS) was born in 2019, to strengthen and unify the communion among all Catholic charismatic renewal groups. By doing this, the Pope moved to canonically establish Charis as a Public Association of the Faithful and, as such, recognised the Catholic Charismatic Renewal as a gift to the whole Church. 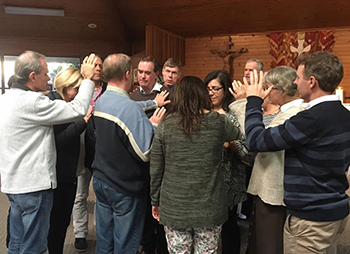 In mid-August, the National Centre for Evangelisation spoke with three members of CHARIS to gain an understanding of what this new arrangement might mean for CCR groups in Australia (a video of some of this interview can be found below).

For 45 years, Shayne Bennett has been a member of the Emmanuel Community in Brisbane. He is the coordinator of CHARIS in Australia and the Vatican’s representative for Oceania on the International Service of Communion. He believes that the Pope, who was very familiar with the CCR in Argentina, wanted to see greater unity among the CCR groups.

Anne Marie Gatenby’s involvement in the CCR has been broad, serving parishes in the leadership of charismatic prayer groups. The establishment of CHARIS has led to her coordinating a group of representatives from charismatic groups in Australia for the ministry of intercession. This intercession is also linked into CCR Oceania and the Southeast Asia prayer network, who pray for the variety of mission areas of the region. These groups are under the banner of what is known as the National Services of Communion. Uniting in prayer is a sign of the willingness of these groups to work together, rather than in silos. CHARIS, Anne Marie suggests, is a reminder to all CCR groups that they are “part of the one family”.

As a young man, Tim Kirk was drawn to the Disciples of Jesus community in Canberra. He is currently the leader of this community, the chair of CCR in the Canberra region and sits on the CHARIS National Service of Communion with Shayne and Anne Marie. Tim emphasises that the Pope has been very clear about his desire for charismatic renewal groups to be at the “service of the Church”, by helping Catholics to recognise and receive more fully the grace of the Holy Spirit, that is gifted to them through their Baptism. As Tim sees it, the charismatic gifts of the Spirit really do provide impetus and energy for the essential work of “renewal and building up the Church” (Lumen Gentium, 12).

Shayne summarises Pope Francis’ call to all CHARIS members as:

This is no small task. But for Shayne, Anne Marie and Tim, once they had experienced the palpable movement of the Holy Spirit in their lives, they felt compelled to share this grace in whatever way they could. Over the years, through programs such as the “Life in the Spirit” seminars, they have seen countless numbers of people renewed in their love for Jesus and what it is to be Catholic.

For Shayne, this “current of grace, which is the action of the Holy Spirit” requires an intentional response from each baptised person. Personal renewal is the foundation for bringing new life to our parish communities. As Anne Marie suggests, “the Holy Spirit is here, ready to be welcomed into our lives”.

To hear more about this story, please click on the video below.