In the late 1980s, the abundance of lay ministers in leadership begged the question: How could these people be supported to work dynamically alongside ordained ministers? In response, the NSW Association of Pastors and Pastoral Associates (NAPPA) was formally established in 1995 with the support of the then-titled Catholic Leaders of Religious Institutes (CLRI) and the bishops of New South Wales. In recent years, NAPPA has become a national association, now known as the Pastoral Ministry Network (PMN).

The move to become a national network has been organic, simply growing out of a demand for support, especially for those in regional areas.

In its new iteration, it continues to welcome laity and clergy who would like to be supported in ministry areas, such as leadership and planning, pastoral councils, evangelisation, hospitality, formation and sacramental preparation. The PMN has a strong and strategic focus on the accompaniment of parishes and leaders, and intentionally engages with diocesan, youth, family, education and outreach ministries.

“There is so much going on,” says Richard, “that we sometimes don’t know where to go for encouragement, ideas and just to share a joy or struggle. PMN is here to tell the good news stories, as a marketplace of shared resources and a safe harbour for lay and ordained ministers to rub shoulders, share wisdom and seek support.”

Another positive aspect of the PMN has been its ability to engage parish clergy. Co-chair Fr Michael Alcock, from Sawtell Parish in the Diocese of Lismore, states:

“I became interested in the PMN when seeking connections with the wider Church. Although I really enjoy living and ministering in regional NSW, a downside can be that we miss out on events, retreats, conferences, speakers and other opportunities held in the larger centres. I have found the PMN a wonderful means to tap into a vast selection of resources that hitherto we had little or no access.” 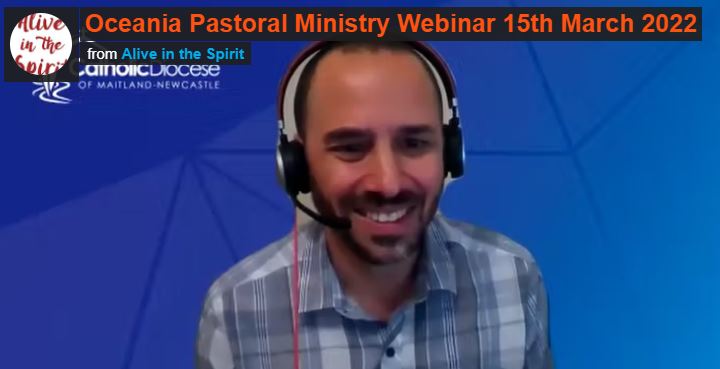 The PMN has established a new website, www.pastoralministrynetwork.org, compiling its experiences and offerings into five key areas of support: networking, resources, communications, advocacy and accreditation. Each area is enhanced by members sharing local tools and the initiatives offered by the network.

In 2021, during the COVID-19 pandemic, the work of the PMN dramatically increased with the delivery of the Alive in the Spirit  Conference. This online offering reached more than 1,000 attendees and was a collaboration with the Mission Planners Network of Oceania and the Christian Initiation Australia Network.

The beauty of this conference was that all the resources linked to it were available for the following six months. This allowed individuals and parish groups to dip into the many offerings, at times suited to their needs. Conference attendees and others also continued to meet online for support and formation in areas identified as being of interest to those involved in pastoral ministry.

Cathy Spencer, director of diocesan outreach and mission Services in the Diocese of Cairns, notes:

“The Alive in the Spirit Conference rates as THE most useful, exciting and engaging experience.”

As for the year ahead, Lisa Bright, executive officer for the PMN, says there is a “rich smorgasbord” for members to partake in. Following the success of last year’s inaugural event, Alive in the Spirit Conference 2022 will be hosted online from May 26-28 with the theme “Being the community Christ calls us to be”.

The PMN also offers regular webinars gathering Church leaders from Australia and Oceania. The first for 2022 was held on March 15 exploring ways of re-gathering your community, with future webinars scheduled for June 14, September 20 and December 6. Members have free access to webinars; it is also possible to pay a single fee to access individual webinars.

The new PMN website also hosts free resources for its members and a selection of resources for non-members. Anyone can view the regular newsletter, book reviews and news. Members have free access to video libraries, discussion forums (in chat rooms and online video gatherings), webinars and discounts to PMN conferences.

Given that Catholics in Australia have dealt with so much over the past three years, it is increasingly important that those working in pastoral ministry feel supported, so they can lead effective ministry at the local level. There is certainly much work to be done in revitalising our parishes, but given the efforts of the PMN, there is no reason why anyone who wants to minister in this area should be under-resourced or going it alone.

To find out more about the PMN, please visit their website. Membership information can be found here.

Alive in the Spirit Conference, 2022.

Faithful Stewards of God’s Grace: A handbook promoting effective pastoral ministry in Australia can be read online or purchased as a book.

For enquiries, please contact This email address is being protected from spambots. You need JavaScript enabled to view it..