For centuries, Lent has been a time for walking the way of the cross. Sometimes this happens inside a church as Christians move quietly around 14 stations depicted on the walls. In their hearts, they share experiences with someone close to them who may be sick or suffering in some way. Other times, it happens in more public settings, as when congregations gather from different denominations to acknowledge the journey they share with each other and with Jesus.

I once belonged to an inner-city parish where, every Palm Sunday, we followed a wooden cross made from fence palings as we stopped outside the local police station, the emergency department, the rehabilitation centre, the high-rise flats, the place where the soup van stopped each night, the last place the Wurundjeri language was believed to have been spoken. At each place, we read part of the story of the sufferings of Christ. It was easy to imagine it happening around us. Nobody ever said very much. A few people always joined us; many watched from a distance. 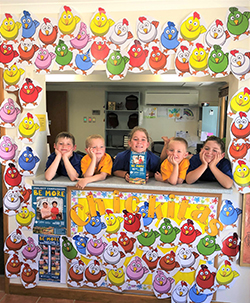 The way of the cross is a good image of the approach Caritas Australia thinks of evangelisation during Lent. We walk alongside people who are challenged by extremely harsh realities, often among the most confronting in the world. We don’t pity or patronise or condescend. We don’t show horrific images to get an emotional response. We are not rescuers from across the seas. We tend not to describe anyone as poor; our work often looks for the capability of communities and supports them as they become better able to express their capacity.

The word we use for this is partnership. Partnership is an authentic model for our work because it knows that the Holy Spirit is at work in every mind and heart, not just ours. Our work is never a one-way street. Its hallmarks are presence, fidelity and listening. Authentic evangelisation builds bridges more than churches.

The word evangelist came into the English language through William Tyndale (1494-1536), as did the word gospel. Tyndale shared his historical moment with St Ignatius of Loyola, St Teresa of Avila and Martin Luther. Europe was in a ferment of change.

Tyndale committed his life to helping people become more actively in control of their lives rather than passively clinging to the sides of their small boat as it was tossed around by heavy seas. His chosen method, facilitated by improvements in printing, was to allow people to read Scripture for themselves. He brought to this task an exquisite grasp of language, especially biblical languages. His ear for the rhythm and poetry of both Greek and Hebrew were remarkable.

We still use dozens and dozens of his expressions: “seek and ye shall find”, “the signs of the times”, “the salt of the earth”, “it came to pass”, “the powers that be” and so on. This is not to mention many individual words, such as “scapegoat” and “passover”. So the word evangelism in English derives from an impulse to empower people at grassroots level. This was the context in which Tyndale set himself to find an equivalent for the Greek euangelion. He chose the language of partnership far more than authority. He coined a word that draws us into humility and service far more than marketing. It is about the sharing of life, not just ideas.

The heart of the symbol of the Caritas Confederation is the cross. We don’t hide it. It is present wherever we are present. But we try to share the story of Jesus with actions rather than words. We don’t go anywhere to talk about Jesus. We go to be the hands, eyes and feet of Jesus in the way in which St Teresa of Avila spoke:

Michael McGirr is the Mission Director for Caritas Australia. He is a writer, reviewer and educator who has published books on philosophy, literature, spirituality and ethics, as well as hundreds of articles, essays and stories, in publications including The New York Times and The Tablet. He has reviewed many books for publications such as The Age, The Sydney Morning Herald and The Canberra Times, and he was previously the fiction editor of Meanjin and publisher at Eureka Street.