Bondi might be known for its beaches, but Fr Anthony Robbie is on a bold mission to associate the sunny NSW suburb with a growing, attractive and flourishing Catholic community.

Since arriving at the Catholic parishes of Bondi – which include the communities of St Patrick’s, Bondi, and St Anne’s, Bondi Beach – in early 2021, Fr Robbie has led a renewed focus on evangelisation, particularly through beauty drawing people closer to God.

“If we don’t evangelise, we disappear completely,” Fr Robbie said. “The evangelisation process includes bringing people into the building, firstly, but then there has to be something attractive for them, something to keep them there.

“So the next stage of evangelisation is giving them something beautiful so that they will stay, and giving them a social context so that they can socially situate themselves and build up some friendships and relationships.” 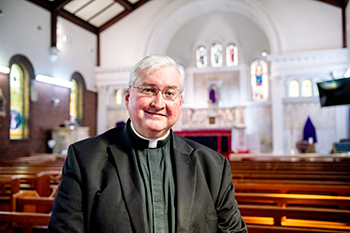 Taking its lead from the Archdiocese of Sydney’s Centre for Evangelisation and its resource, Go Make Disciples, the Bondi parishes have implemented a range of evangelisation initiatives in the past 18 months, as well as making some visible changes to the parish churches – both of which are more than 95 years old.

“The churches have been extensively renovated,” Fr Robbie said. “Not changed from what they were, but really restored to the original dignity of their architectural scheme and they’ve been beautifully ornamented as well, with proper fittings, candlesticks and altar frontals and artworks appropriate to the architectural style of the buildings.”

The parishes have also begun to host monthly nights of catechesis for men and women, regular social activities for the community and evening Adoration twice a week.

Additionally, music director Eugene Raggio has implemented a range of initiatives, which parishioners have received positively.

“We now have a choir in each parish,” he said. “We are committed to fostering the Catholic tradition of sacred music and developing choral leaders and soloists through our scholarship programs, which we offer in both parishes. We've installed electronic organs at both churches and we have begun a concert series also.

“The music program represents a radical change, but growth has been exponential, especially early in the beginning of the year and we expect more in 2023 as the program solidifies.”

Parishioner Sue Ferguson, who has been a part of the St Anne’s, Bondi Beach parish for about 30 years, said it was a “great joy” to see the parishes thriving as a result of their renewed focus on evangelisation through beauty. 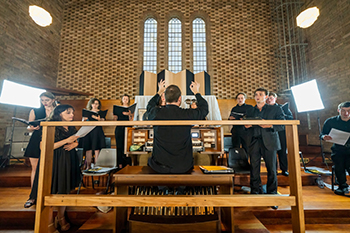 “There’s a lot of young people that have come into the parish and it really is uplifting,” she said.

“Sometimes you think there is no hope for the Church… but then the increase in the numbers of young people; it’s just astounding. There are probably more young people coming to the Sunday Mass than there are older parishioners.”

Sue said the renovated churches are attractive to those passing by, including the many tourists who visit the region.

“Often when I’m there just praying quietly, people come in from off the street and they comment on what a beautiful church it is,” she said.

“But the beauty of our parishes goes beyond our buildings, and it’s reflected in the Mass and the liturgies, the sacred music and the feeling that one is taking part in something that truly lifts our hearts and minds to God and deepening our relationship with him.”

Fr Robbie said his focus on beauty stemmed largely from having spent several years living and studying in Rome, where he was surrounded by many majestic and historic treasures of the Church.

“The whole world comes to see them… because they’re beautiful, inspirational, moving and uplifting,” he said. “Completely irreligious people and people of other faiths flock to the great churches of Europe.

“Our churches should be the repositories of the best that the human spirit is capable of producing, and that expresses itself in music, the liturgy and the fittings of the church.”

The three transcendentals – truth, goodness and beauty – are the means by which people come to experience God, Fr Robbie said.

“In the pursuit of the finest artforms, we hope to be able to give people an idea of the transcendence, beauty, majesty and the dignity of God himself in a way that the ordinary, mundane elements of this world are not normally capable of doing,” Fr Robbie said.

“Beauty brings God closer to us, fills us with delight and wonder and provokes the soul and the imagination in such a way that the spiritual life is opened up.”

Fr Robbie said he continues to look for ways to enhance the life of the parish communities and to evangelise the public, encouraged by the positive feedback he’s heard already.

“The young people, who have been coming in increasing numbers, have said, ‘We love the music, we love the liturgy, we love the beauty that we see here’,” Fr Robbie said.

“The beauty is drawing people in.”