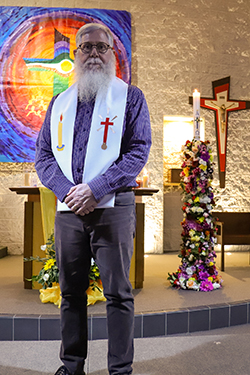 In 2019, when David Campbell visited St Stephen’s Cathedral in Vienna, he was overwhelmed with the realisation that he wanted his spiritual home to be within the Catholic Church.

David, however, was no newcomer to the spiritual life. He had spent much of his 60-plus years searching and immersing himself in various denominations – some Christian, some not. Many of these spiritual encounters gave David hints of what it was like to have God in his life, to experience prayer, Scripture and community.

But the one faith tradition he didn’t try was Catholicism. This was not because he was opposed to the Catholic tradition; indeed, it was almost the opposite. David had friends and family members who were Catholic, and his admiration for the way they adhered to their faith led him to believe that he could never be worthy or disciplined enough to be a Catholic.

After David’s experience in Europe, he decided that when he returned to Australia he would investigate what was required to become a Catholic. He contacted his local Catholic parish in Gungahlin, Canberra, and was provided with information about the Rite of Christian Initiation of Adults (RCIA). The journey towards being fully initiated offered David formation and information, as well as an opportunity to properly discern his conversion to Catholicism.

Disappointingly, just as the RCIA gatherings were about to take place, COVID-19 struck, and Canberra was soon forced into lockdown. Fortunately for David, the local parish embraced Zoom technology and they continued with virtual gatherings.

While David missed the face-to-face connections with his RCIA cohort, he was in a position to immerse himself in all things Catholic. Having migrated to Australia from the United States in the early 2000s, David had retired from his career as a public servant and had time on his hands to explore the Bible, the Catechism of the Catholic Church and listen to podcasts, especially those from Bishop Robert Barron. He connected with the Catholic Enquiry Centre and found its resources to be helpful in deepening his knowledge. 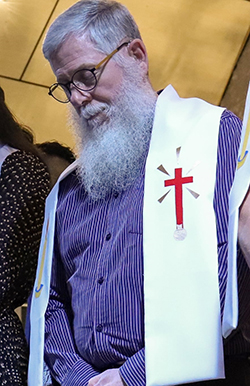 In March 2022, David participated in the Rite of Election ceremony at St Christopher’s Cathedral, and a few weeks later he was confirmed into the Catholic Church at the Easter Vigil. When asked how his family had reacted to the news of him becoming a Catholic and what difference it was making in his everyday life, David said he felt fully supported by his family. His wife, a devout Buddhist, has noticed he is a much calmer person now. She often overhears David listening to online Masses and Vespers, the evening prayer of the Church, and will comment on the beautiful singing.

David said this conversion process has helped him to “finally find the spiritual fulfilment and inner peace I have been searching for all my life. Attending Mass, partaking of the Holy Eucharist, having daily prayer and praying the Rosary has made a huge difference in my life – and for the better.”

David’s other passion in life is genealogy. He has been seriously researching his family history for many years. He has discovered half his family on his mother’s side were “devout and practising Catholics” and he had a cousin who was a priest. In recent times he has also discovered that St Mary of the Cross MacKillop is his paternal 10th cousin, three times removed!

It seems that becoming a Catholic was always meant to be David’s destination in his spiritual journey.